Humans are on their way of going back to the Moon on 2024, and presumably to Mars sometime in the next few decades. Vast amount of preparation for such future space exploration missions take place, at least some of which has direct effects that leak into several aspects of the society. One part of those preparations is "Planetary Analog Research", where space exploration missions are simulated on Earth, on sites called "Space Analogs" or "Analog Habitats". Locations for those habitats are typically chosen to be uninhabited and naturally challenging areas (i.e. deserts, glaciers, volcanoes, underground caves etc.). Analog missions are traditionally structured to study human factors, to test new technologies and safety routes, and to perform multi-disciplinary scientific research on site while utilizing the plans for experiments that would take place during an actual space mission, in a manner that is "as realistic as possible".

Imagining or designing life on a new planet can not be detached from any part of the human experience. This fact calls for additional research angles into the process. While legal, ethical and social aspects of an anticipated future in space are debated by various scholars, questions such as "How will art flourish on another planet in relation to new social norms and living conditions?" naturally arise.

Searching an answer to the above question would be fundamental for designing and grasping our anticipated multi-planetary future. There is yet another layer to the possibilities that a space analog mission provides, potentially leading to artistic innovations that could very well be just Earth-bound, which is the main focus of the current study. These possibilities arise from the very nature of analog missions: "Acting" as if in outer space while doing "actual" research on Earth, creating its own performative and theatrical aspects with limits to the factual and to the fiction, mixed realities, juxtapositions, change of perspectives, differences in conceptions of time and place, situational awareness adapting to unfamiliarity, and strong anthropocentric approach at an uninhabited location.

Other than the poetry formation upon being "neither here not there", the actual scientific practice that takes place on site under exceptional circumstances provides a platform and various entities to be tackled through intertwined artistic practice. Such an interaction of artistic and scientific practice is latent to creating and shaping meanings, narratives and objectifications. This would serve not only preparing for an anticipated future but seeing the Earth and our connection to it with different eyes (where, ironically and unexpectedly, some aspects of that future are experienced today due to the current pandemic). Artistic view would both contribute to and gain from this transformative era.

While "citizen science" contribution to the field of space analog missions is on the rise, regarding artistic research potential is yet to be effectively utilized. In this talk, initial findings and future insights gained from the latest Lunar and Martian analog missions will be presented. 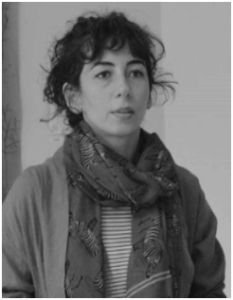 Istem Özen
132. Is There Art on Mars?: Planetary Analog Missions as Artistic Research Laboratories (Istem Özen)
Istem Özen is a materials scientist, artist, and space enthusiast. She inquires the extent of concepts and methods in natural sciences diffusing into humanities and arts (and vice versa), aiming for a continuum encompassing all. She is currently studying at the Art & Science M. A. program at the University of Applied Arts Vienna, is a researcher at the Vienna University of Technology - Institute of Materials Chemistry, and a scientific support team member for the Austrian Space Forum for Mars Analog Missions. She has participated in exhibitions including Data Loam (2019, Angewandte Innovation Lab, Vienna), Boxels group installation by students and alumni of Art & Science, University of Applies Arts Vienna in "Biennale Sessions" at La Biennale di Venezia (2019), and Origin Poetics (2019, Aula of Sciences, Vienna).
Istem Özen
Back