Olga Tokarczuk, the Polish winner of the Nobel Prize for Literature in 2018, has noted that one of the greatest challenges of our times is questioning anthropocentrism, thereby offering an expression of her posthumanist convictions. According to this writer, the essence of humanity is the pursuit of change, transcendence, and transgression, as reflected in her work, which is full of variable, ambiguous characters, whose complex ontic status can be described as hybrid. Hybrids are a regular element of Tokarczuk’s posthumanist imagination, in which the boundaries of the identities of species become fluid and changeable, and subjectivity is reserved not only for people, but also for things, animals, and plants. This is the case of Ergo Sum, one of the protagonists of the novel House of Day, House of Night (2003), who, as a result of traumatic wartime experiences, undergoes a metamorphosis, becoming an animal. This change in species identity is a critical moment in his life: he ceases to be a human being, but is not yet an animal. This process, repeated at every full moon, is cyclical and unavoidable, but at the same time, paradoxically, makes Ergo Sum free. The metamorphosis of Renata, the protagonist of ‘Transfugium’ (from the collection Bizarre Stories, 2018), who voluntarily undergoes transfugation—a transformation process into a wolf—is characterized by another dimension. Tokarczuk, in the posthumanist spirit, proposes a new covenant of humanity with nature, involving the former’s retreat from any interference in the latter and the creation of a kind of reserve—a Transfugium—a place without people, heterotopic, and impossible to comprehend by means of human reason.

Hybrids are also the subject of the works of Patricia Piccinini, an Australian artist admired and repeatedly cited by Tokarczuk. In her works, Piccinini proposes to blur the boundaries between what is natural and artificial, human and beyond human. The artist’s works simultaneously depict human and non-human, animal and non-animal beings alike. The boundaries marking identity become fluid; subjectivity takes on new meanings; questions arise concerning the nature of the relationships between human beings and the natural world, the right to use other species for our own needs, and finally the primacy of one life over another. Serving as expressions of Piccinini’s posthumanist attitude are sculptures of transgenic beings from the cycle We Are Family (2002–03), whose animal-human features incline the viewer to reflection on the hybrid nature of humans, animals, cyborgs, and mutants. In her work Leather Landscape (2003), the artist presents a group of seven humanoid creatures, combining the features of the appearance of human beings and African meerkats, accompanied by a small human girl. Despite the differences dividing them, the child and transgenic beings seem to exist in perfect harmony. The presence of the “other” awakens neither fear nor hostility, but rather curiosity and the desire to make contact. The difference between the child and the seven creatures is a basis not for value judgments but for blurring of boundaries and breaking down of existing prejudices and species-based taboos.

The aim of the present paper is to analyze selected threads of Tokarczuk’s work and the cited works of Piccinini as a posthumanist critique of anthropocentrism. My analysis will be guided by the question of how art clarifies and helps us to understand a world in which boundaries between species are crossed and dualistic divisions—nature/culture, human/animal, human/machine—no longer apply. In the paper I will show that art is a space of expression in which the subjectivity of posthumanist hybrids is given the chance to infiltrate universal consciousness and break down the anthropocentric monolith of Western European culture. 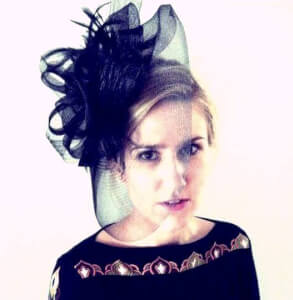 Natalia Anna Michna
13. Wolf, Pig, Meerkat, and Human Being: Are They Really Separate Species? Hybrids in the Posthumanist Work of Olga Tokarczuk and Patricia Piccinini (Natalia Anna Michna)
Natalia Anna Michna ‒ PhD in philosophy. Employed as an assistant professor at the Institute of Philosophy, Jagiellonian University in Krakow, Poland. Principal developer of the research project ‘The Roman Ingarden Digital Archive: Unknown Correspondence and Academic Papers of the Eminent Polish Humanist’ financed by the Ministry of Science and Higher Education of the Republic of Poland. Director of a project entitled ‘The Concept of Female Experience and the Problem of Feminist Aesthetics’, financed by the National Science Centre in Poland. Deputy editor-in-chief of the philosophical-aesthetic quarterly The Polish Journal of Aesthetics. Recently has published a book entitled Women and Culture. The Problem of Experience in Feminist Philosophy (2018). Research interests concern feminist philosophy, contemporary art, and the aesthetics and philosophy of Roman Ingarden. In private life, loves playing with her cats, eating delicious food, and cooking for her family. Favourite forms of relaxation include home gardening and travelling around the world. ORCID: https://orcid.org/0000-0001-9334-474X.
Natalia Anna Michna
Back