The Islanders are often criticized in the media for being privileged for living on the islands, but they view themselves as environmental stewards, and as artistic and historic documentarians of the island, in conjunction with the Indigenous community. Their political resistance to the island homes being razed by bulldozers has been legendary, and their ongoing quest to save the Toronto Island from floodwaters, airport expansion and increasing urbanization are depicted throughout this documentary, intercut with their efforts to protect their homes from flooding. ‘The City Island’ is a forensic examination of the loss of the park system through natural and man-made causes from the point of view of the islanders as they sandbag the shores of the Toronto Islands, under the guidance of parks supervisor, Warren Hoselton, as they protect the island shores from erosion.

‘The Lakeside Home for Little Children’ is a prototype for a virtual reality and augmented reality documentary which traces the journey of a young patient from the SickKids Hospital in downtown Toronto to the Lakeside Hospital on Hanlan’s Point as part of an annual procession in 1893. In this open air sanitarium, the ten-year-old girl undergoes treatment from tuberculosis, and returns to the SickKids Hospital at the end of the summer. As an augmented-reality smart phone application, the project can be viewed at the hospital’s former site at Hanlan’s Point on the Toronto Islands, and as a VR project, it can be viewed to learn about the hospital’s charitable history. It is intended to recreate a little known part of the history of the SickKids Hospital, and create empathy for a child undergoing heliotherapeutic treatment based upon medical archives.

Both of these projects will be discussed in detail to focus on my social justice working methodology during my presentation. During my presentation, I will also discuss how ‘The City Island’ was translated into a VR narrative based upon archival research. 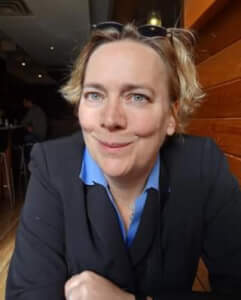 Elizabeth Littlejohn
127. The City Island (Elizabeth Littlejohn)
Elizabeth Littlejohn is a communications professor, human rights activist, photojournalist, and documentary film-maker, who teaches in Toronto. She has written for Rabble.ca for the past thirteen years on social movements, sustainable urban planning, and climate change. As a running gun social movement videographer, she has filmed internationally. Her articles, photojournalism, and videos have been published widely to document the Occupy and climate change movements, LGBTQIA* rights, and Idle No More, and printed in NOW Magazine, the Toronto Star, and Our Times.   In 2018 she directed, filmed and produced ‘Leelah’s Highway’, a broadcast half hour focusing on the suicide of trans youth, Leelah Alcorn, and ‘Frolic’s Haunt’, a nine-minute film about a queer, accessible haunted house with its own unique scare system. Both of these documentaries were shown in international film festivals. ‘Leelah’s Highway’ won honourable mention for best short film in OutShine and the Cindependent Film Festival in 2018.   Presently she is in post-production on ‘The City Island’, a feature-length documentary she directed about the razing of homes on the Toronto Islands and the islanders’ stewardship of the park system in the time of flooding and airport expansion. Parallel to this documentary, she is developing an AR/VR project recreating the medical treatment for children in the Victorian-era ‘Lakeside Home for Little Children’ sanatarium, also located on the Toronto Islands.
Elizabeth Littlejohn
Back