By approaching computational aesthetics as movement, can we open up new ways of exploring the relationship between bodies and codes that go beyond binaries such as discrete or continuous, formal or feeling, virtual or physical? Although many contemporary artworks link dance and technology, their discourses often approach this instrumentally, using technology for creative augmentation. In the process, dance and code remain as contradictory and loosely linked worlds. This paper, instead, proposes to explore the idea that we can go beyond these binaries by thinking the algorithm as an aesthetic of movement, without having to ignore the formal, measurable and calculable. It will use Soft Computing, as developed by M. Beatrice Fazi, as a starting point. Fazi argues that abstraction is indispensable for constructing experience, opening up a possibility for a relationship between the discrete and the continuous. This relationship will be explored in two esoteric languages (esolangs). The first case is the artificial language Neocriollo created by the Argentinian Avant-Garde painter Xul Solar, which (re)combines English, Portuguese, French and native dialects into a single language. It will focus specifically on his mystical visions inspired by the I Ching, written between 1925 and 1935 and published in the book Los San Signos. His visions open worlds of fog and smoke, barely human heads, days turned to nights by the inexplicable gesture of a god and always end with a fall into the “real”; world. As this paper will show, both the system used by Xul and the themes that fill his visions are marked by algorithmic thinking, and it is through their esoteric natures, their (in)computability, that they are able to not just represent this world abstractly but to create an experience of it through movement. Neocriollo will be juxtaposed with Befunge, an esolang written in 1993 by the programmer Chris Pressey that, instead of using natural language, proposes movements in space as algorithmic thinking: the code is written and executed by moving up, down, left, and right in a two-dimensional grid. The exploration of movement in these works helps pave the way for new methodologies for thinking and exploring dance and code that raise important questions about our relationships with technology. The aim of this paper is not to provide solutions, definitions or scientific proofs, but rather to show how movement can be a way to, finally, feel code for what it is, both computable and incomputable. After all, as machines begin to feel, we need to adapt along with them; and this paper proposes to dwell, with our bodies, in these feelings before producing new technological inventions. 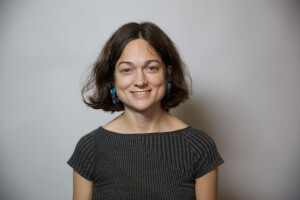 Renee Carmichael
123. Incomputable Feelings: Moving in the Esoteric Languages of Xul Solar and Befunge (Renee Carmichael)
Renee Carmichael is a researcher, writer, and artist. She is a doctoral candidate in Comparative Art Theory at the Universidad Nacional de Tres de Febrero in Argentina. Her thesis research focuses on the aesthetics of contemporary dance and code (algorithm), exploring a relationship between the formal and the feeling. She has a master’s degree in Interactive Media: Critical Theory and Practice from Goldsmiths College in London, has previously worked as a researcher in the Hybrid Publishing Lab at Leuphana University in Germany, is founder of the experimental publishing project Flee Immediately!, and is co-founder of the podcast Liminal Bits. Her research, writing, and artworks often bring together poetic and interdisciplinary ideas that explore the boundaries between theory and practice. Her texts have been published internationally in both academic and artistic publications including #exstrange: a curatorial intervention on eBay (Michigan University Publishing), Perífrasis Journal, Unlikely Journal, Sync.io, among others.
Renee Carmichael
Back