Recently, I’ve realised that the closely related activities of weaving patterns, interpreting patterns, recognising patterns and analysing patterns are all pivotal in providing a common thread linking both natural events and all forms of human enterprise. At the cosmic level, order or pattern occurs as a result of the unexpected triumph of natural selection acting together with the spontaneous order of self-organised systems. These can be regarded as the twin sources of pattern making order that have produced not only us but, also, everything we experience that surrounds us. Now, as I descend from Mount Olympus to the real world, I can begin to see that the cybernetic approach I’ve applied to solving the ‘exceedingly complex problems’ of the Company similarly have involved harnessing twin sources of order, acting over separate time scales, to establish new organisational patterns. Not only architects, but also biologists have been slow to grasp the extent to which twin influences, often those of ‘diversity versus conformity’ and ‘flexibility versus stability’, impact on the pattern making processes by which organisms and organisations maintain themselves. Profound order can be found in large, complex and apparently random systems as I’ve discovered in my search for a unifying pattern which could explain the astonishingly intricate architecture of the human brain – a task that demands that we start at the beginning, ie. at the earliest stage of embryonic development. In plucking up courage to show my conjecture to a leading developmental biologist in London, I received the encouraging response that my patternist simplification was not a conclusion but, potentially, another useful step towards making the invisible visible.

This explanation of a lifelong engagement with patterns cannot be complete without turning to the ordering of sound, ie. music, which has formed an unwavering pattern of activity underlying all my other adventures. I now realise that architecture is a world of relationships very close to that of the performing musician – an idea I pursued in a piece of Visual Music called ‘Citirama’ where I joined the patterns of architecture with the rhythms of music and, conversely, the rhythms of music with the patterns of architecture. Music continues to inspire new forms of pattern making. In the light of today’s parasitic invasion I can now see that my latest piece, ‘Passeggiata’, a visual interpretation of Luciano Berio’s Sequenza IXa fo solo clarinet, reveals not only music but, also, life itself poised precariously on the edge of chaos. When life becomes unbalanced, as now, we search for ways to  restore it to a natural state somewhere nearer the order we remember although, inevitably, still finely balanced. No doubt, it is this thought that has inspired me to tell my own story of transcendence at TTT2020 and further, to issue a clarion call for patternists everywhere to dig deep in tackling the most ‘exceedingly complex problem’ of all, climate change, which is no longer just teetering on the edge but in imminent danger of reaching a point of no return. 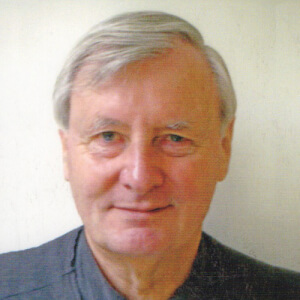 Terry Trickett
115. Patterns of Existence, from cosmic to cellular and neural to musical (Terry Trickett)
125. 'Passeggiata': a paradigm for the times in which we now live (Terry Trickett)
Working previously as an architect and designer, Terry Trickett has now become an artist performing Visual Music worldwide at new media festivals and conferences. Sometimes the inspiration for his pieces is primarily musical; at other times, he uses Visual Music as a means of tackling a difficult subject or putting forward a controversial point of view. Always, he aims to share his ideas by combining animated visual imagery with musical performance on solo clarinet. As a participatory form of communication, Terry Trickett finds that Visual Music is affective because it succeeds in engaging with audiences at both an intellectual and emotional level. He has attended the last two Consciousness Reframed conferences, in Beijing 2017 where he presented and performed ‘An astonishingly intricate architecture: Visual Music of the Brain and Mind and in Porto 2019 where he presented and performed ‘A stride towards sentient cities: Architecture as performance art’.
Terry Trickett
Back