When I began my artistic research on Landscape and Trauma in Iceland in 2018, the key question I pursued was the perception of nature and its beauty in the face of natural disasters causing death and destruction. Can the natural beauty (however dangerous it has proven to be) be therapeutic?

I worked with people who had experienced some kind of natural catastrophes. I wanted to find out if/how their perception of Nature/landscape has changed after such experiences. What came out during these meetings was another interesting notion - how intense landscape engineering is required to keep some places inhabitable. „Trauma” in Greek means „ a wound”. I believe landscapes can be traumatized after abrupt geological events too. Not directly by a disaster but by people’s reaction to it. We tend to insist on our presence and inhabitation of some dangerous areas. We build up structures, move towns, we fence the mountains, put on a 24h „surveillance” to be informed in time to escape. We keep on negotiating our living space. When thinking about Landscape and Trauma now I see not only people but also places that have their „scars”.

There has always been a considerable degree of this negotiation of living space and conditions with geologic actants, in some regions, like Iceland, clearly more than in others. „...(W)e are not simply ‚surrounded’ by the geologic (...) We inhabit the geologic.” (Ellsworth&Kruze, Making the geologic now, p. 25). Wherever we live. Only now, with the human impact on climate and environment so intense „...the pace of geological change quickens, allowing human and geological time to intersect through events (...)” with the geologic becoming „palpable as a contemporary material force.” (Ellsworth&Kruze, Art in the Anthropocene, p. 155). J.Bennet mentions another important change - a „geologic turn”. „By making a geologic turn we direct sensory, linguistic and imaginative attention toward the material vitality of the earth itself.” (Making the geologic now, p. 25). Since the catastrophic events defined as „sudden instances of monumental change” (Ellsworth&Kruze, Art in the Anthropocene, p. 158) have began to affect  places traditionally deemed „safe”, living on the edge of a disaster will soon become the whole world’s everyday reality. Moreover, thinking about human impact on climate questions the strict division into man-made and natural disasters. Anthropopressure is so intense that actually many of the so called „natural disasters” are largely man-made. We keep on „producing” some disasters and turn to landscape „re-engineering” to keep us safer. And we keep on „producing” new ones...

My research started in Iceland, but will be continued eg. in Indonesia, where people too have to face abrupt geological forces and live in insecurity, yet, unlike Icelanders, often lack material means to protect themselves. Learning about their strategies, both emotional and logistic, of coping with such abrupt geological events will fulfill the image of living on the edge, which might very soon be something we will all have to learn to cope with. 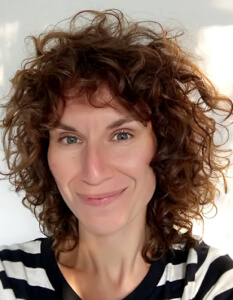 Anna Kedziora
111. Hætta - on the edge of a disaster (Anna Kedziora)
Anna Kedziora (PhD), born in 1982, lives and works in Poznan, Poland. Visual artist and curator. Assistant professor and a former head of Photography Part-time Program (2016-2019) at the Photography Faculty (University of Arts in Poznan, Poland). Co-founder and manager of an international photography competition Poznan Photo Diploma Award. Her field of artistic research embraces a wide scope of what might be called „Conflicted Landscapes”. She has worked i.a. on the notions of Landscape & Power, Landscape & Trauma, and most currently Landscape of Loss. Her main medium is photography and video, she also experiments with ceramics and installations. Her work often involves field research eg. during research journeys to Iceland, Spain, Thailand and Cambodia.
Anna Kedziora
Back