As far as we know there have been no transgender people in space. Yet transgender people, as well as others who engage in extensive body modification necessary for survival such as disabled folx, might be the most suited for space travel given our somatic experiences of deep xenological transformations. Such transformations will likely be required for survival and thriving both in extraterrestrial as well as future terrestrial environments. I am exploring these issues through projects in my newly launched tranxxeno lab, a nomadic artistic research laboratory that investigates the productive entanglements between entities trans and xeno. The first project, entitled TX1, launched fragments of my hormone replacement medications to the International Space Station and marked the first-known time that elements of the transgender experience orbit the earth. TX1 ultimately safely returned to the surface of the earth. This was a symbolic exodus from a planet that is often inhospitable to us, yet its return was a sign of resilience, of not simply being discarded as burnable waste. I have also started a new project, tentatively entitled Xenological Entanglements: 001. Plurigenesiology, which begins the development of DIY space research in two ways. First, I will be developing an open-source microgravity simulator, given that most existing devices are proprietary and extremely expensive. Second, I am exploring how to genetically modify my own Leydig cells, either sourced from my testes or induced from pluripotent stem cells, so that they overproduce estradiol. This would enable transgender women on hormone replacement therapy to have a non-commercial source for the estrogen that our bodies so need, and that would be impossible to procure on long-duration space missions.

These projects lead us to consider the audacity of queer and transgender futures in space, ques-tions of more-than-human enhancement that connect to the historical legacy of the cyborg, the history of cosmism, and also are part of my research into xenology, or the study, analysis, and development of the strange, the alien, the other. Xenology means not running away from the strange or alien, but rather highlighting it, foregrounding it, understanding it as a vital practice necessary to a world that attempts to be made homogeneous through capitalism. Through xenology we can engage in practices of “xenomogrification”, which highlights the grotesque–in the widest senses of that word–transformation into the alien and the other for the purposes of disalienation. By this I mean disalienation from our capacities for change, which under capitalism is grossly limited to only those possibilities that can make a profit. Xenomogrification suggests potentials beyond this, drawing from the universe-given potential for variability and newness. As a practice then, xenomo-grification enables those who are already seen as other–such as those who are transgender, queer, or xeno–to further develop themselves into new entities that thrive, articulating vibrant trajectories out of our current grating mess. 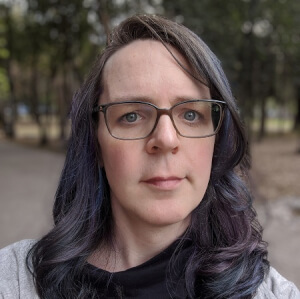 Adriana Knouf
102. Tranxxeno Entanglements: On the Audacity of Imagining Transgender People in Space (Adriana Knouf)
Adriana Knouf, Ph.D. works as a xenologist, as an artist-scientist-writer-designer-engineer. She engages with topics such as biological art, space art, radio transmission, non-human encounters, drone flight, queer and trans futurities, the voice, and papermaking. She is the Founding Facilitator of the tranxxeno lab, a nomadic artistic research laboratory that promotes entanglements amongst entities trans and xeno, and is an Assistant Professor of Art + Design at Northeastern University. Adriana is the author of How Noise Matters to Finance (2016) and other written work on topics like bioart, queer and trans existences, and weird temporalities. She has been selected for a number of prestigious residencies, including a Biofriction residency (SI) and participation in Field_Notes (FI), and regularly presents her work around the world.
Adriana Knouf
Back