The Anthropocene is rife with the calamitous warnings of climate science, now hearkened by a new roster of biotechnology start-up companies who propose to invent lab-grown meat as an alternative to the ecologically disastrous livestock industry. Solutionist hype is used to promote ‘sustainable,’, ‘eco-friendly,’ ‘cruelty-free,’ “clean meat,” masking a continued reliance on animal agriculture: mammalian tissue is only grown in vitro using fetal calf serum, a blood-derived nutrient. Thus the question still remains: Is it possible to grow meat without relying on animals?

Scientific protocols exist for growing mammalian tissue with standardized human venous serum. Very recent research has established the potential of menstrual fluid for skin wound repair, as well as analysed its unique growth factors compared to venous blood. However, there is a dearth of scientific information about wider applications of menstrual blood in biotechnological contexts. There are no publications that characterize the nutrient potential of menstrual blood for mammalian tissue culture. Menstruation and menstrual blood remain hugely taboo topics and may be so culturally abhorrent as to sometimes be intentionally avoided in research contexts.

The research-creation project I will present, entitled Mooncalf Menstrual Meat (MMM) intersects witchcraft with laboratory practice from a material and eco-feminist point of view, through body-based art and science experimentation. I am currently engaged in a series of wet lab experiments to determine the viability of menstrual serum as a substitute for fetal calf serum used to culture mammalian tissue. My experiments present a direct provocation that problematizes the cellular agriculture industry as it pertains to the production of ‘clean meat,’ instead working towards a proof-of-concept ‘unclean’ meat prototype.

The alternative use of human menstrual ‘mana’ is relevant in that it references historical trends of cannibalism believed to have occurred due to food scarcity during times of climate change. The term, ‘mooncalf’ is an outmoded descriptor that once denoted an abortive mass of tissue, typically formed in a bovine uterus. This ‘monstrosity’ was feared to be a product of lunar influence, usually an eclipse or ‘blood moon’. Ritual observation of the blood moon links the mooncalf to apotropaic rituals such as blood sacrifice, meant to mitigate supernatural malevolence happening on the scale of apocalyptic calamity. The term later came to refer more broadly to anything idiotic. MMM is meant to invoke pre-scientific magic rituals dealing with uncontrollable (super)natural forces, while providing an entry point to reconfigure the witch as a skilled nature-culture mediator.

By referring to the “witch”, I am specifically addressing the culturally villainized figure of female or feminine autonomy, as well as a contemporary feminist activist identity that aligns with post-colonial, posthuman ecofeminism. As such, witchcraft includes not only craft praxes, but also sci-tech praxes that intersect with art/craft ─ praxes increasingly claimed by feminist artists working in biotech and performing socially reproductive labour. In her book, “Bioart Kitchen; Art, Feminism and Technoscience” (Kelley, 2016), artist and scholar, Lindsay Kelley asks, “What do new technologies taste like?” MMM is a symbolic precursor or speculative promise meant to facilitate a cultural taste for feminist biotechnologies. 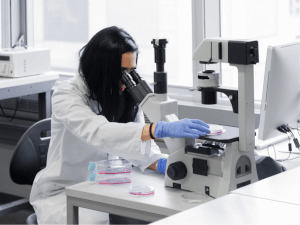