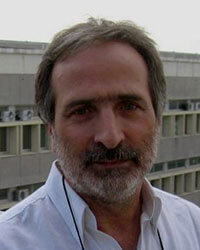 His scientific interests are: Spectroscopic study of hot emission stars in the visible and ultra violet (UV) region of the electromagnetic spectrum, Spectroscopic study of Active Galactic Nuclei (AGNs) in the visible and ultraviolet spectral region, stellar atmospheres, binary star systems and History and Philosophy of Science. He has cooperated with many observatories in Greece and abroad.

He has published more than 200 scientific papers in international peer reviewed journals and proceedings of international conferences in Greece and abroad. He is the author of 24 books on the subjects of Astrophysics, of History and Philosophy of Sciences and of social interest. He is coauthor in 7 University Textbooks and he is the scientific editor or he has written the preface of 10 books and 14 statistical studies. Furthermore, he is the author of more than 250 scientific articles and more than 200 articles of social interest in the daily and periodical press.

He has given more than 320 lectures as a guest speaker at universities, scientific associations and Unions.

He has been the writer and presenter of 151 scientific documentaries presented in seven television series. Hundreds of thousands of reports can be found online related to them. He has received the “Aronis” and “'Koskorozi” awards from the University of Athens and the Ministry of Education, for a series of books and the “Hellenic-American University prize” for the TV series “The Universe I loved”. He has also been awarded by the Association of Physicists and by many Greek Municipalities for his overall research and educational contribution.

Universe: The land of Utopia

What would we think if we could realize that everything we perceive around us is not the real Universe but a distorted and partial image on a three-dimensional Euclidean mirror made by the human physiology?
What would we think if we could really understand that the Universe is timeless and that each one of its points is simultaneously everywhere? That Universe has no “in” or “out”? That whatever we perceive as distant it is just old, and everything we perceive as big it is in fact small?
We would probably think that we are in the land of Utopia. But the truth is that the land of Utopia is the Universe that our physiology let us measure and perceive.
So, let us search for the real Universe and its properties in the world of modern physics, beyond and outside the utopia of fake material reality.