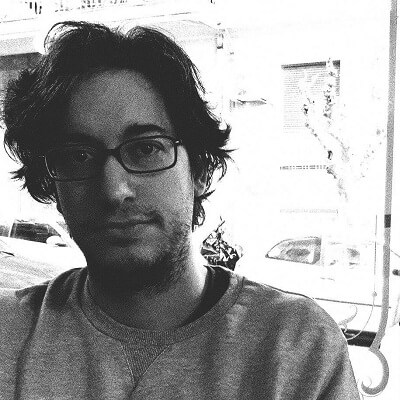 Yorgos Drosos is an author as well as a Doctoral Candidate at the Department of Audio and Visual Arts of the Ionian University. He has published two works of prose fiction: the novel Ελληνική Ασφυξία (The Greek Suffocation, Ekdoseis ton Synadelfon, 2013, under the pen name Elias Nisaris) and the novella Το Ορφανό Αριστούργημα (The Orphaned Masterpiece, Evmaros Publications, 2017, under his real name). In 2020 he contributed the narrative essay «Η Μπαλάντα του Ιπτάμενου Πιγκουίνου» (“The Ballad of the Flying Penguin”) to the collective volume 42 Κείμενα Καραντίνας (42 Quarantine Stories, Evmaros Publications). His articles, short stories and poems have appeared on a variety of print and online media in his native Greece (3point Magazine, ποιητική, Lifo, HUMBA!, Το Παράθυρο, Fractal Press, να ένα μήλο, Kommon, Consider, Metropolis Free Press, The Cricket etc.). In recent years, parallel to his work as a writer and his Ph.D. research, Y. Drosos has started the project Συνεντεύξεις με  Ανύπαρκτους Ανθρώπους (Interviewing the Non Existent), which combines the visual arts with literature, making use of various influences from comics, cinema, pop art and meme culture. The project was first presented in a physical solo exhibition in 2018 and continues to evolve online.

Workshops
Fiction Is Invention – A Creative Writing Workshop
Back to instructors