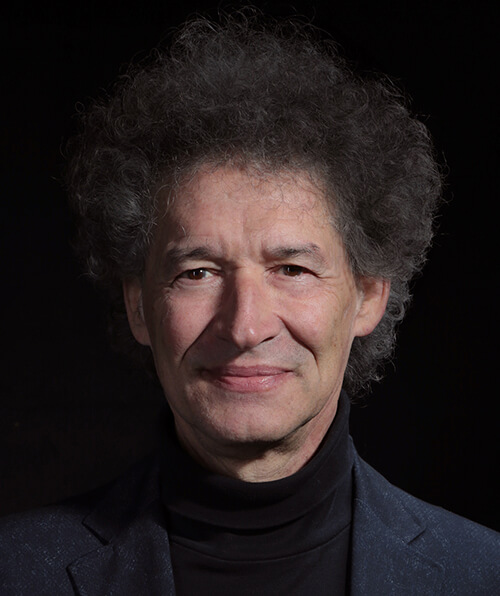 Description of the hyperspatial acoustic system

Description of an interactive installation art on acoustic hyperspace

Specific points in a given space are virtually designated to sources of sound. In the same way that written words can be imprinted on the surface of a piece of paper, so can sound be spatially imprinted in three dimensions. Then, the sensory organ for sound can ‘read’ it as it traces its course. Every point in space corresponds to a point in time of the sound, which no longer evolves in time since it is a spatial phenomenon. Visitors may approach and move away from the virtual sources and the distances that they keep from them are modified in proportion to their speed of movement. Every source creates its own acoustic space. Visitors’ perception of the sound emanated by a source depends on their distance from it and on the distance’s rate of change. Thus, they may perceive sound as evolving slowly, or quickly, or even stopping and, also, they can hear it correctly when moving away from a source that is when the distance is increasing or backwards when the distance is reducing.

Occultist Johan Van Manen’s describes accurately a ‘fourth-dimensional globe’; i.e., a hypersphere:
[…] The fourth-dimensional globe can be better described. It was an ordinary three-dimensional globe, out of which on each side, beginning at its vertical circumference, bent tapering horns proceeded, which, with a circular bend, united their points above the globe from which they started. So three circles are formed, the lower one representing the initial globe, the upper one representing empty space, and the greater circle circumscribing the whole. If it be now understood that the upper circle [empty space] does not exist and the lower (small) circle is identical with the outer (large) circle, the impression [of the fourth-dimensional globe] will have been conveyed, at least to some extent […] (Van Manen, 1913: 58).
We propose that it is likely that Johan Van Manen envisioned not a hypersphere, but a projection to three-dimensional space of a hyper-solid that has some folds. It is this 3d visualization that he named (wrongly) “fourth-dimensional globe”. It is also interesting that Ouspensky does not agree with his interpretation of Johan Van Manen’s “fourth-dimensional globe” schema and comments that there might be a:
[…] possibility of constructing a certain pseudo-fourth dimension which, in actual fact, lies entirely in three dimensions. In my opinion the figure is full of motion. The whole figure seems to me moving, as though constantly arising in the meeting point of the sharp ends, spreading out from there and being re-absorbed there (Ouspensky, 2005: 134-35).

Our proposed cosmological model of a 'double'-'closed' Universe is based on the following reasonings:

a) One of the models of our Universe, supported by Cosmology, is the ‘closed’ Universe, which is described by the three-dimensional hypersurface of a four-dimensional hypersphere. According to this theory, the evolution of this Universe is initially the expansion and then its contraction. (Guth, 2013 a & b)

b) While the General Theory of Relativity allows the Universe to start from a dimensionless point, as the ‘Big Bang’ theory argues, Quantum Theory claims that nothing can be compressed less than the Planck Length (1.616*10-33 cm). (Green, 2004: 337, 560-61) This incompatibility that exists at a microscopic level between those two Theories ceases to exist because of the Quantum Geometry of String Theory. According to this Theory, if we assume that for some reason the Universe begins to contract due to the gravitational force, then this continues contraction does not lead to a Universe ‘crush’ but to a Universe ‘bounce’. (Green, 2004: 342)

c) In the model of the Interrelated Notions of Distance (Green, 2004: 342), if the radius of a circular dimension is less than the Planck΄s Length and constantly decreases, based on Quantum Geometry, it does not differ from the natural processes where this dimension has a radius greater than the Planck’s Length and is constantly increasing.

d) The physical consequence of Quantum Geometry is that the physical properties of the Universe, based on the properties of its elemental components, are the same for a Universe whose circular dimension has a radius R with a Universe having a radius 1/R (where the value 1 means 1 time the Planck’s Length). (Green, 2004: 353)

e) Our Universe, on the basis of today’s data, stretches over 15 billion light years. However, we don’t know what happens beyond hat distance; i.e., whether the dimensions are unlimited or circular. If the Universe is circular, it can be subjected to the matching of the R and 1/R circular dimensions of String Theory. (Green, 2004: 354)

f) Johan Van Manen, at the end of his 'hypersphere' schema description, states that:

[…] If it be now understood that the upper circle does not exist and the lower (small) circle is identical with the outer (large) circle, the impression will have been conveyed, at least to some extent […]. (Ouspensky, 2005: 133)

That is, he suggests that the small ‘full’ sphere is the same as the ‘outer’ that encloses everything and essentially forms a solid.

We propose a new cosmological model of our Universe combining of all the above with emphasis on the model of the Interrelated Notions of Distance of Quantum Geometry (c above) with the statement of Johan Van Manen (f above). That is, its shape is similar with Johan Van Manen’s ‘folded’ hypersolid but the ‘outer’ sphere, which represents the ‘large’ Universe, has no fixed radius (R) and may be varied from infinity to zero. This variation affects the radius (1/R) of the smaller ‘full’ sphere, which, according to the Quantum Geometry Theory (d above), represents the parallel ‘small’ Universe, since there is an inverse ratio connecting the two radii (R and 1/R). So, the radius of the ‘full’ sphere conveys the value of the radius of the ‘empty’ sphere, since the sum of their diameters must be equal with the value of the ‘outer’ sphere’s diameter. When the two radii are equal to Planck’s Length (R=1/R=1), then the two ‘full’ spheres are equal and the ‘empty’ sphere is nullified and when the radius R of the ‘outer’ sphere increases, the radius 1/R of the ‘full’ sphere decreases . But, what happens while expanding the ‘outer’ sphere and the radius reaches (almost) an infinite value? Then, the ‘full’ sphere almost disappears, while the ‘empty’ sphere gets an (almost) infinite radius and occupies the innerspace of the ‘outer’ sphere.
If we accept that the ‘full’ and the ‘outer’ sphere are four-dimensional and the value of the radius of one of them is almost infinite then, according to our proposed model, the final result should be a three-dimensional hypersurface of a four-dimensional hypersphere that is constantly expanding and represents the ‘closed’ three-dimensional Universe we live in.