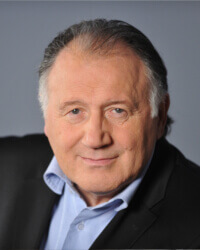 Born in Odessa in 1944, Peter Weibel studied literature, medicine, logic, philosophy, and film in Paris and Vienna. He became a central figure in European media art on account of his various activities as artist, media theorist, curator, and as a nomad between art and science.

From 1984 until 2017, he has been a professor at the University of Applied Arts Vienna. From 1984 to 1989, he was head of the digital arts laboratory at the Media Department of New York University in Buffalo, and in 1989 he founded the Institute of New Media at the Städelschule in Frankfurt on the Main, which he directed until 1995. Between 1986 and 1995, he was in charge of the Ars Electronica in Linz as artistic director. From 1993 to 2011 he was chief curator of the Neue Galerie Graz and from 1993 to 1999 he commissioned the Austrian pavilion at the Venice Biennale. He was artistic director of the Seville Biennial (BIACS3) in 2008 and of the 4th Moscow Biennial of Contemporary Art, in 2011. From 2015-2017, he was curator of the lichtsicht 5 + 6 – Projection Biennale in Bad Rothenfelde.

Since 1999, Peter Weibel is Chairman and CEO of the ZKM | Center for Art and Media Karlsruhe and since 2017 director of the Peter Weibel Research Institute for Digital Cultures at the University of Applied Arts Vienna.

Professor Peter Weibel publishes widely in the intersecting fields of art and science.

Prof. Weibel was granted honorary doctorates by the University of Art and Design Helsinki, in 2007 and by the University Pécs, Hungary, in 2013. In 2008, he was awarded with the French distinction “Officier dans l’Ordre des Arts et des Lettres.” The following year he was appointed as full member of the Bavarian Academy of Fine Arts Munich, and he was awarded the Europäischer Kultur-Projektpreis [European Cultural Project Award] of the European Foundation for Culture. In 2010, he was decorated with the Austrian Cross of Honour for Science and Art, First Class. In 2013 he was appointed an Active Member of the European Academy of Science and Arts in Salzburg. In 2014, he received the Oskar-Kokoschka-Preis [Oskar-Kokoschka-Prize] and in 2017 the Österreichische Kunstpreis - Medienkunst [Austrian Art Prize - Media Art]. In 2015 he was appointed as Honorary Member of the Russian Academy of Arts in Moscow.