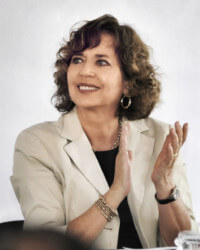 Rosaura Ruiz Gutiérrez received her doctorate in biology at the National Autonomous University of Mexico (UNAM) and went on to carry out postdoctoral research at the University of California with Dr. Francisco J. Ayala. She has been an invited professor at the University of California and at the University of the Basque Country, as well as a contributing professor to the CSIC’s History of Science Department in Spain. She is a founder and currently member of the board of directors of the International Network of the History of Biology and Evolution (RIHBE), constituted by researchers from CSIC (Spain), the Museum of Astronomy and Related Sciences (Brazil), Universidad Andrés Bello (Chile), the Pontifical Catholic University of Ecuador, the National Council for Scientific and Technical Research (Argentina), the University of Salamanca (Spain), the University of Modena and Reggio Emilia (Italy), among others. She has been a coordinator for eight books with this workgroup, these being the product of the International Colloquiums on Darwinism in Europe and America organized by the RIHBE; as well as the “Darwinian Library” collection, which has so far produced 14 volumes.

Professor Dr. Ruiz is a member of the Mexican National System of Researchers, the Mexican Academy of Sciences, and has held various administrative positions within the UNAM: she was head of the General Directorate for Postgraduate Studies, head of the Secretariat of Institutional Development, Director of the Faculty of Sciences, and Coordinator of Special Academic Projects of the UNAM’s General Secretariat. She was moreover the first female president of the Mexican Academy of Sciences. She currently continues her teaching and research work as a full-time Professor at the UNAM’s Faculty of Sciences. She is currently a member of the government of Mexico City, being Secretary for Education, Science, Technology and Innovation.

She has obtained various awards for her academic work and commitment to scientific education and communication. Among these, the following stand out: the José Antonio Alzate Award for the best communication article (2004); the Alfonso Robinson Bours Medical Education Award (2005); the Gold Medal for Talent among Mexican Women FICMaya 2017, and the Municipality of Quito’s annual award, in the category of Social Sciences, for the content of the book Evolutionary Biology in America and Europe: Anthropology, Biology, Politics and Education (2017).