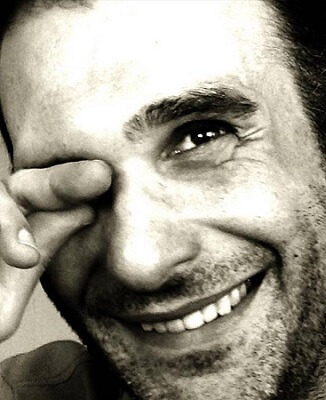 Haris Bosinas studied Biology at the Aristotle University of Thessaloniki, while at the same time he graduated with a scholarship from the Drama School of “State theatre of Northern Greece”. Bosinas worked as an actor in many performances on small and large stages in Athens, while he also participated in several TV series with the first being "I love you, you love me". He started writing in 2000 and in 2006 he made his first performance at the “Epi Kolono Theater” in his own text and direction entitled "Ophelia is pregnant". This was followed by a series of theatrical texts for the Athens Festival, which included performances, the last of which was "Too many work", which was staged at the Zoe Laskari Theater in her memory. For television, Bosinas has edited the scripts and stories in "Family Stories", while his screenplays were transferred to other countries that dealt with the same concept. He has also written for "The divorced guys", "Do not start mumbling", "Just yesterday" etc. while recently he took over the editing of a new Alpha series. He also conducts theatrical and television writing seminars at the Katapacti Theater Workshop.
Seminars
Creative screenwriting tutorial
Back to instructors